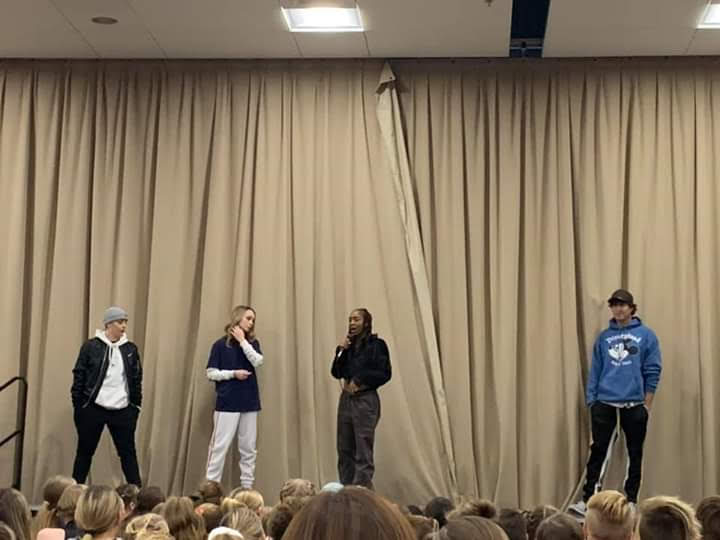 Kylie Bronk, Taylor Hatala, Comfort Fedoke, and Jason Celaya standing on stage introducing themselves to everyone at the convention

Looking for a cheap way to meet professional choreographers? For only $95 you can spend 6 hours learning from choreographers who come from all over. Jason Celaya, one of the choreographers and the Hip Hop Utah Coordinator says, “the price is never going up!”
In Salt Lake City, Utah a dance convention called Hip Hop Utah is held on the first Saturday of November each year. Dancers get to spend 6 hours in the Salt Palace Convention Center, to learn from 4 different choreographers. New choreographers get to come in and work with new people, and three of the four get to work with people who are both new or they have worked with before. The main man who runs and organized Hip Hop Utah is Jason Celaya. He has worked so many kids and has choreographed for many commercials and ScottDW YouTube Videos. He’s also come here for Twin Falls to choreograph dances for the Revolution Academy of Dance (RAD). Which they have performed several of those dances here at Canyon Ridge.
Another returning choreographer to Hip Hop Utah is, Comfort Fedoke. She’s a “season 4 star on SYTYCD and now one of the show’s All-Stars!” her style of hip hop allows you to learn different types of backgrounds and foundations of hip hop. Kylie Bronk is also another returning choreographer and she “toured with Odyssey Dance Theatre and with Gerda Truubon throughout Europe for Fashion Week.”
This year they had the famous Taylor Hatala come all the way from Canada. She has “toured with Janet Jackson, performed with Justin Bieber, Chris Brown, and on the Ellen show!” And last year they had, Gabe De Guzman, a dancer who had been on the TV show Shake It Up!
Those of you who are dancers and want to continue dancing as a career, such as commercials or working with celebrities. A lot of the dance work out there is hip hop. So this convention is a great way to learn and broaden your opportunities in the future. And for the people who aren’t really a dancer, or don’t think you are, Hip Hip Utah is a great opportunity to try something new or just for fun. Spend a weekend out of town with your family and amazing people.
But for those who aren’t really into doing hip hop for 6 hours, there is another convention that they hold during the summer. Which is known as their UtahSummer Jam, where you can learn different genres of dance, such as Ballroom, Contemporary, Jazz, and Musical Theatre. Same price, same fun, different genres.