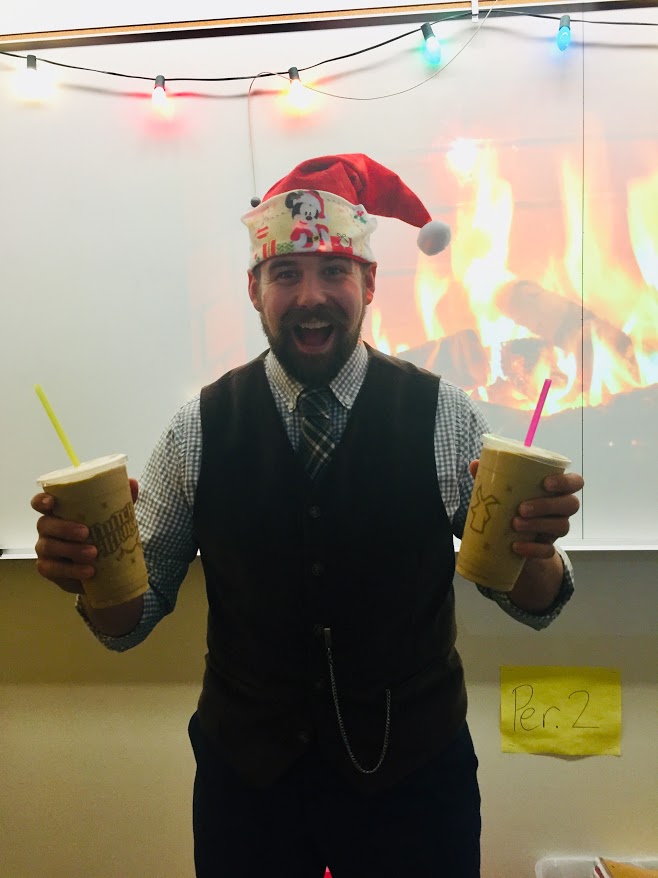 Many students have favorite teachers whom they want to get Christmas gifts for, either to be nice and treat their teacher or raise their grades a little higher to pass the semester off with good grades. Whether or not it is for the courtesy of getting something nice for your teacher, it can be sort of hard for students to know what to get. Nevertheless, Mr. Henkelmann the teacher for both Honors and Regular 10th grade English, has his students covered. On this whiteboard at the front of his room, he has a big list of what he wants for Christmas. With the list labeled “Mr. H’s Xmas List,” students know exactly what to get the man for Christmas. Making it even easier, all of the items on his list have to do with Dutch Bros.

On December 5th Henkelmann posted a selfie on his google classroom, including the caption saying, “THANKS, ROMAN! MERRY CHRISTMAS!” The photo was of him holding a “Dutch Freeze NO Whip” in front of his Christmas list for all his students to see that he received a Christmas gift from one of his honors students, Roman Marasin (10).

This triggered his other students to bring him more Christmas gifts. Four days on December 9th, after Roman brought Henkelman the first Dutch Freeze this school year, Emma Dickinson (10) brought Henkelmann his next one. The next day Roman brought him ANOTHER Dutch Freeze. Followed up but Jason Jones with a $5 dollar gift card to Dutch Bros. The day after that  Henkelmann received not one but TWO dutch freezes. One from Caleb Lewis (10) and another from Lucy Schuerman (10). Making Henkelmann a very happy man. “#DoubleDutch.”

Ever since his student came into his room Henkelmann has emphasized his specific order of a “Dutch Freeze, NO Whip.” but after receiving such generous gifts from other students, Jamison Perry (10) brought Henkelmann a cup of “Whip no Dutch Freeze.” Although Henkelmann asked for the total opposite of what Jamison got him, it was quite a laugh and the students enjoy seeing Mr. Henkelmann with a smile.